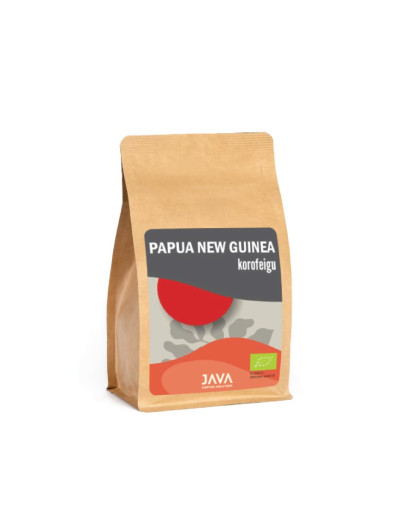 As Arabica, it has a milder flavour and sweeter notes.

It is perfect as an espresso but also goes well with a milk or vegetable drink.

It will taste great when brewed in a portafilter, filter, automatic, French press, coffee maker and traditional method.

The coffee comes from the Korofeigu Cooperative, which currently associates 97 small producers dealing in the cultivation of organic coffee. Their farms cover 112 ha and are situated in the Ben Ben valley between Goroka Henganofi. The mountainous area and fertile clay soils favour the cultivation of coffee and other fruit trees that provide natural shade for coffee trees.

In early 1945, when the war in New Guinea was coming to an end, the administration allocated four plots of land in the Korofeig area for the cultivation of coffee. Thirteen teenagers from Korofeig were selected and sent to the newly opened school, where they were educated in coffee production.

For the next year, government officials moved across the Eastern Highlands, selecting plots of land and encouraging farmers to plant coffee while continuing to train youth in these areas. The first reaction of the indigenous peoples was indifference, it was considered a waste of time and it was not profitable for them to wait 3 years for the first harvest.

Some plots of land have been neglected but none have been removed, allowing the coffee to begin growing in the area. Today, coffee cultivation in Korofeig has become one of the most important sources of income in Papua New Guinea and 1/3 of the population lives on it.

There are no reviews for this product.